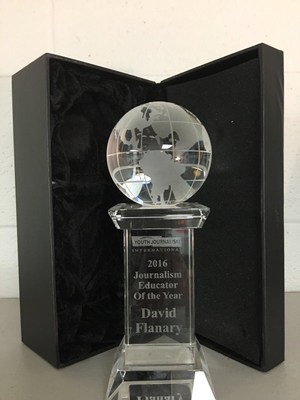 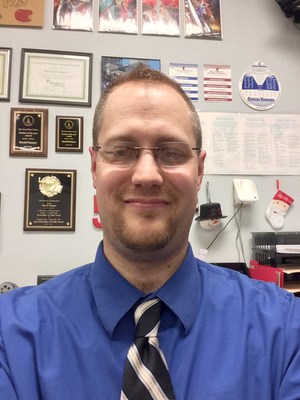 David Flanary, social studies teacher and journalism adviser at Sevier Middle School, has been named the Youth Journalism International (YJI) Journalism Educator of the Year.
Published on May 19, 2016 at 11:23 a.m.

KINGSPORT, Tenn. – David Flanary, social studies teacher and journalism adviser at John Sevier Middle School, has been named the Youth Journalism International (YJI) Journalism Educator of the Year. This incredibly prestigious award from the YJI is based on submissions from numerous countries across the globe. This is the first time a middle school teacher has won the award.

Now in its seventh year, the YJI’s annual global media contest recognizes student writing and reporting, art, photo and multimedia skills in news, sports, opinion and other categories published or broadcast in 2015 by student journalists, ages 19 years or younger. A panel of experienced judges evaluated the entries, which came from high schools and individuals from around the globe who write for school papers, blogs or other media.

This year, winners span throughout 19 U.S. States, and nine countries on five continents. John Sevier’s student newspaper, The Sequoyah Scribe captured 10 awards, tied with Hickman High School in Columbia, MO for the most awards won in the global contest.

"We were especially wowed by the success of a middle school competing against older students from some of the nation’s most renowned high school journalism programs,” said Steve Collins, YJI’s board president. “Mr. Flanary is doing something right in Kingsport.”

Awards won by The Sequoyah Scribe from YJI:

“David Flanary inspires, motivates and builds students as journalists by helping them find their voice,” said Dr. Holly Flora, Sevier Middle School Principal. “We are so proud of David and all of the students who are a part of our Sequoyah Scribe Newscast and Newspaper.”

Flanary’s students, in their letters about him and the work they produced, made a compelling case. “He truly believes that we can write about anything,” said Molly Turner, sports editor of the school paper, The Sequoyah Scribe. “If there is an article we want to write, he always tries to make it happen.”

“Mr. Flanary the first middle school teacher to win this award, oversees a topnotch student paper that reaches out beyond the school’s walls but doesn’t neglect what’s happening close to home. It’s a model middle school publication that only a compelling, caring teacher could guide,” stated a write-up on youthjournalism.org.

In total, The Sequoyah Scribe student newspaper program has won 34 awards for the 2015-2016 school year.

Flanary was born and raised in Germany as the son of a U.S. military serviceman. He became interested in journalism as a middle school student, when he began writing for his school’s student newspaper. He continued writing for his high school and college newspapers and, as a teenager, wrote freelance for the German newspaper Die Rheinpfalz. Flanary returned to the U.S. in 1999 at the age of 15. He has taught middle school social studies in Kingsport City Schools for the past eight years. During this time, he started The Sequoyah Scribe student newspaper and its broadcast companion, The Sequoyah Scribe Newscast. Prior to KCS, he worked as a substitute teacher, and tutored Math and German at the University of Virginia’s College at Wise.

Flanary earned a Bachelor of Arts degree, with a major in History and a minor in Political Science, from the University of Virginia’s College at Wise. He also participated in the “Reynolds High School Journalism Institute” for journalism advisers at the University of Nevada, Reno.

Youth Journalism International (YJI) has been educating the next generation of news professionals and talented teens since 1994. Formally incorporated in 2007, it is a 501(c)(3) educational non-profit public charity. For more information about YJI, visit youthjournalism.org.