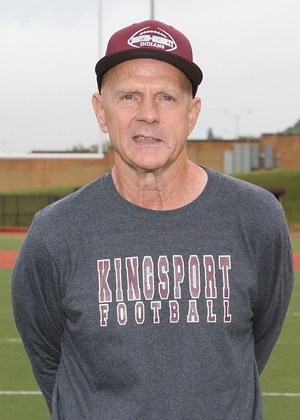 Dobyns-Bennett High School educator and Hall of Fame Head Football Coach Graham Clark has announced his intention to retire at the end of the current school year.

Kingsport, Tenn. – Dobyns-Bennett High School educator and Hall of Fame Head Football Coach Graham Clark has announced his intention to retire at the end of the current school year, ending his Hall of Fame career as the winningest football coach in the history of the school.

In 25 seasons leading the D-B football program, Clark totaled 233 wins, with a winning percentage of over 77%.  He guided the Indians to 17 conference championships during his tenure, including 25 consecutive playoff appearances.  With two additional seasons as head coach at Chilhowie High School (VA), his career record of 252-71 includes 14 seasons of ten wins or more.

“Coach Graham Clark exemplifies all that is great about being a leader, both on and off the field,” said Kingsport City Schools Superintendent Dr. Jeff Moorhouse. “In addition to being a coach of the highest caliber, he is a man of character that has led the our program with great honor and integrity. He is a Hall-of-Famer in every sense of the word.”

“For a quarter century, Coach Clark has set the standard for excellence both as a coach and a person, for which we are forever grateful,” remarked Dobyns-Bennett Principal Dr. Chris Hampton. “He is a beloved leader of our football program, school, and community.  He has positively touched the lives of hundreds of young men during his tenure as D-B head coach.  His incredible legacy as the leader of the Tribe will be forever etched in the history of Dobyns-Bennett High School.”

KCS Athletic Director Larry Shively added, "Though it would be easy to measure Coach Clark's success with the many accolades and awards he has received and the 252 times he has been victorious on Friday night, the true indicator lies in the individuals he has positively impacted during his incredible career.  Through his passion for supporting our community and his players, both during their playing career and beyond, he has improved and changed the lives of so many."

With Coach Clark’s retirement, current Football Assistant Coach Joey Christian has been named interim head coach.  A national search will begin immediately to identify the next head coach of the Dobyns-Bennett football program.

Kingsport City Schools (KCS) is a public school district located in Kingsport, Tenn., serving students in Sullivan and Hawkins county. The district is comprised of 13 schools, including a Pre-K, eight elementary schools, two middle schools, one high school, a high school program of choice and an alternative learning program; with total enrollment over 7,700 students. The vision of Kingsport City Schools is to be, Student Focused … World Class.

KCS has been named the top school district in Tennessee as winner of the 2014 SCORE Prize District Award by the State Collaborative on Reforming Education (SCORE) and has earned the 2014 Achievement Award in the annual Excellence in Tennessee Recognition Program by the Tennessee Center for Performance Excellence (TNCPE).

For more information on KCS, visit k12k.com, listen live on WCSK 90.3 FM, The Voice of KCS, read our blog, We Are KCS, download our mobile app for Apple / Android devices or call (423) 378.2100. We’re social too; follow us on Facebook (Kingsport City Schools), Twitter (@KCS_District), LinkedIn (Kingsport City Schools) and check out our YouTube Channel (KPTSchools).